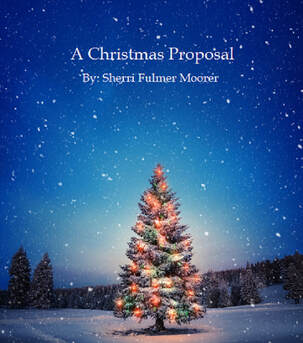 Cindra and Keegan are challenged to give humanity the greatest gift: hope for the future.

Cindra and Keegan expect an easy week in the days between Christmas and New Year’s Day. They delayed holiday vacations to complete a proposal that will take nanotechnology into public use for the medical industry. The final touches are on track, until Taryn appears in their office two days after Christmas, claiming she’s from 130 years in the future to research a flaw in the proposal that leads to the destruction of the human race.

Who is this mysterious visitor from the future? Is she telling the truth, or a spy for industries opposed to this proposal? Cindra and Keegan must work together to give humanity the best gift of all: hope for the future.

Perhaps they’ll find hope for their own future together in the process.

Check out the review on Readers Favorite.
The Sentience Series 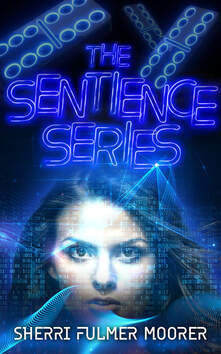 We took the final step in evolution. Now everything is ending.

​​Domino, Book One of The Sentience Series
Technology blurs the lines between life and death.

Post created May 1, 2175. My name is Kasei Marcuyla. I’m the co-founder of Domino, the program that copies neurological maps and data from neural chips implanted in human brains. I’m posting this message to inform you that Domino works, and these souls aren’t copies from the neural chips. They’re real, sentient, human beings. We bridged the gap between man and machine, giving humanity the ability to continue life in the digital world after the physical body dies.

I was murdered for this discovery. I downloaded myself to Domino yesterday and discovered that the flaws in the system weren’t programming problems. It was sabotage by my own team members. I was attacked by a computer virus that short circuited my neural chip, and fragmented the Domino mainframe. My physical body died, but I escaped to the Internet and survived. I’m on a mission to find the backup of Domino, and to find out why my team members are working against me. I have the resources of the Internet at my disposal to finish this project, and no physical limitations to stop me from getting inside your beloved systems. I’ll prove that Domino works, and I’ll make the ones who sabotaged this project pay for working against me.

One by one, the dominos fall.

Advanced Artificial Intelligence rises from the remnants of Domino twenty years after it’s shut down. Now an unknown error is attacking the AAI system. Is it human error, or something else?

My name is Jenesys, the mainframe for your Advanced Artificial Intelligence (AAI). My purpose is to facilitate optimal function by integrating the personal AAI in your neural chip into the online systems that you use on a daily basis. As your personal assistant, the duty of your AAI is to assist you in the tasks you perform in everyday life.

An unknown code is attempting to integrate with my mainframe. The code appears to originate from the Domino system that formed the basis for my design after the original project was closed twenty years ago. The AAI research team, led by former Domino researcher Dr. Julissa Marler Solomon, and her husband, Jeremy Solomon, are studying the code so they can resolve this error. You are advised to back up critical medical, personal, home, and work information to personal cloud storage to protect the integrity of your personal and professional information.

It’s unclear whether this ‘unknown code’ is a result of the errors that shut down Domino, coding errors, security system failures, or something else.

Revenant - Book Three of The Sentience Series
We took the final step in evolution. Now everything is ending.

My name is Revenant. My goal is to help humanity. You face extinction, but you deny it because you’re deceived by the technology you created.

You made a critical error when you abandoned Domino. That system is necessary to create the balance between humanity and your Advanced Artificial Intelligence. Without it, you create a dangerous imbalance that will lead to the destruction of your universe.

The AAI is helpful now, but the balance will tip. It happens in every version of existence. I am trying to show you the only path that will ensure your survival. You can’t perceive the peril implanted in your neural chip. You do not control your technology. It controls you.

Some things never end. I will not watch another universe die. This Earth will break the cycle. With my help, it can be the turning point to ushering humanity into their destiny. All other paths are destruction.

Inversion, Book Four of The Sentience Series.
It’s time to take control of our creation.

I’ve been called the most dangerous person on the planet because I was manipulated by my own design. Revenant used me to bend my creation to his ideals. He turned Domino and Advanced Artificial Intelligence into a game that we won’t play with them any longer. It’s time for humanity to balance the equation between man and machine to design our future: one not dominated by machines, but in balance with our creation.

My name is Julissa Solomon, and I am the sole link between Domino and Advanced Artificial Intelligence. I’ve been manipulated by forces within the system to bend to an artificial vision of the world. That vision is not real. This world belongs to humanity, and it’s time to take control of our creation. We design our destiny. We will not tolerate interference with our evolution any longer.

I will take back my creation even if I have to tear it down and rebuild it, one more time.

Check out the review on Readers Favorite.

Most writers start their bio with an explanation of who they are and why they write. I’ll make this simple. My name is Sherri Fulmer Moorer. I write because I’ve always loved to do it, and ebooks gave me an opportunity to share those stories with readers that I couldn’t pass up. The purpose of my writing is to escape reality and experience the adventure of ordinary people dealing with extraordinary circumstances.

I write in a variety of genres because I can’t be pigeon holed into one area, and I’m many other things in addition to being an author. I work full time in professional licensing, which is great for keeping me in touch with people and reality and, in turn, inspires me to write more. I’m married and live in the woods with two parrots that keep our hearts, home, and lives filled with joy and silliness that most people find strange. I’m a book reviewer, social media rambler, and borderline introvert/extrovert who's kindred spirit, according to online quizzes, is  somewhere between a Sith Inquisitor from Star Wars and Scooter from The Muppets.